When buying and selling second hand Rolex watches it is important to research and educate yourself as much as possible about the item. The Rolex Submariner has seen many changes over the years and I am hoping that this will be a useful resource for you when you are making a purchase.

The Rolex Oyster case was first developed in 1926, its water tightness and durability became famous when Mercedes Gleitz managed to swim across the English channel with a watch on her wrist. Rolex has always strived for perfection and wanted to push the boundaries of watch making world and after lots of experiments and many years of research they produced the Rolex Oyster Submariner. It was first released in 1953 with a guaranteed water resistance of 100 metres, which soon increased to 200 metres and by the late 80’s had increased to 300 metres.

The first Submariners looked quite similar to the ones we know today, the most striking thing that is missing are the crown guards. As we mostly sell watches from 1990 onwards I will focus on the main changes and subtle differences over the last  25 years or so.

The Rolex Submariner 14060 dates from 1988 to 1999 and has many features that we would still associate with the 1953 design such as the black rotating bezel. The 14060 has a stainless steel case with a Rolex Triplock crown and it has visible lug holes. Between the lugs at 12 o’clock you can find the model number and between the lugs at 6 o’clock you will find the serial number, the serial number can be used to help find the date of manufacture. The watch has a uni-directional black diving bezel and a black Tritium marked dial with Swiss T<25 below the 6.  It has the Rolex Oyster 93150 bracelet with a diving extension. The watch is powered by the automatic Rolex 3000 calibre movement. 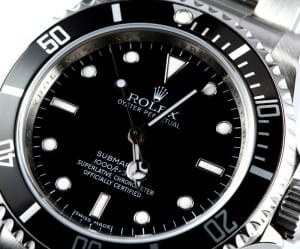 The Rolex Submariner 14060M dates from approximately 1999 and has had a series of small changes over it’s lifetime. The movement was upgraded from the 3000 to the 3130 calibre which boasted a larger balance wheel and full balance bridge. The luminous on the dial was changed from Tritium which was signified on the older dial by T<25 to Luminova. Tritium had received some bad press for being radioactive however the quantities used were perfectly safe and it was widely used in the watch world. In 2007 it became officially certified as a chronometer* and had this added to the text on the dial, in the past Rolex did create officially certified chronometer Submariner non dates model number 5512 but they are very rare. Between 2008 – 2010 Rolex added the engraved inner Rehault which displayed the watches serial, this meant you no longer had to take the bracelet off to see the serial and Rolex believed this would be extremely hard to forge. In 2010 Rolex introduced random serial numbers which meant that you could no longer date a watch from it’s serial number alone.

Submariner Non Dates to look out for:

A military edition Rolex Submariner 5513, It has a letter ‘T’ within a circle on the dial and is very rare and very expensive.

A ‘Comex’ Rolex Submariner 5513, ‘comex’ is written on the dial, again it is very rare and sought after.

A ‘Tiffany & Co’ Submariner, various different models had the dealership written on the dial and it helps make the Rolex just that bit different which helps to further increase the value and rarity.

*Chronometer- To become a certified chronometer the time piece must pass a series of vigorous tests by the Contrôle Officiel Suisse des Chronomètres, C.O.S.C.

If you are interested in buying or selling a Rolex, please visit our website for more details.