Cartier is a designer brand that produces fine jewellery and luxury watches. Founded in 1847 by Louis-Francois Cartier in Paris, the company now retails its collections across the globe, with stores in 125 countries. Cartier is one of the most respected brands in the watchmaking industry and has over 160 years of experience creating and selling its famous watches and elegant jewellery.

The brand was also responsible for creating the first ever practical wristwatch in 1904. Before this time, pocket watches were the only form of time telling accessories, until a Brazilian pioneer named Alberto Santos Dumont approached Cartier, complaining of the impracticality of pocket watches. Louis-Francois then set about designing the first ever wristwatch, aptly named ‘The Santos’.

Throughout its 160 year history, Cartier has had many famous fans, including King Edward VII, who described Cartier as ‘ the jewellery of the kings’ and even  issued a royal warrant to the brand after they provided tiaras during his 1902 coronation. Royal warrants were also given to Cartier from Spain, Portugal, Russia, Siam, Greece, Serbia, Belgium, Romania, Egypt, Albania, Monaco and the House Of Orleans.

Cartier has produced many watches during its time and is a name synonymous with high end, sophisticated timepieces. The Tank, which was first produced in 1917 has been re-designed more than thirty times and is still being sold today. Other well known models from the brand include the Ballon Bleu de Cartier and the Calibre de Cartier. Although the brand is known for its watches and jewellery, Cartier has branched out in recent years, producing other luxury goods including leather handbags, fragrances and sunglasses.

At Miltons Diamonds, we currently stock a collection of Cartier watches and jewellery. Many of our models are pre-owned but you can be certain that each watch has been checked and vetted by our team to make sure you receive an authentic and genuine Cartier watch. 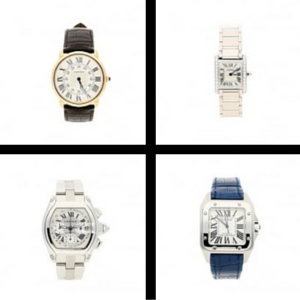