X
This site uses cookies to provide and improve your shopping experience.
If you want to benefit from this improved service, please opt-in. Cookies Page.
Accept Cookies
Menu
Watches

Most of us wear a watch each and everyday. It’s something we use to tell the time, to add a touch of elegance to a look or to offer as a special gift to someone we love. But when exactly did we start wearing watches and who invented them? We take a look at the history of watches, from the moment they were introduced to modern day timepieces.

Obviously, watches would not have been invented if it weren’t for clocks and the very first pendulum clock was created by Christiaan Huygens in the 1600’s. The pendulum clock would prove to be a positive leap for the clockmaking industry as the design was much more advanced than previous time telling devices.

The very first wearable timepiece was said to have been invented by German inventor Peter Henlein in the fifteenth century. But rather than being worn on the wrist, clock watches were placed on pendants and worn around the neck, similar to the design of pocket watches. Pocket watches became more and more popular during the 1600’s, especially with the introduction of waistcoats by Charles II of England. Between the 1600’s and the 1800’s, the balance spring, marine chronometers and lever escapements were invented which helped improve the accuracy of watches, thus propelling their popularity resulting in mass production of pocket watches across the world.

The first wristwatch was said to have been created by Abraham Louis Breguet in 1810. He designed the watch for Caroline Murat, Queen of Naples. Wristwatches were almost exclusively worn by women, while men continued to wear pocket watches. In the late 1880’s, men in the military began to wear wristwatches which helped increase the popularity of them among males. Manufacturers started producing lines of wristwatches, essential a standard pocket watch fitted to a leather strap rather than hanging from a pendant.

From then on, the watch industry continued to flourish, with the invention of self winding, electronic and quartz designs. Today, watches are so much more than just time telling devices. Many choose to wear them to make a statement or to add sophistication to a look. With hundreds of brands producing watches of different styles and designs every season, there are plenty on the market to choose from.
Here at Miltons Diamonds, we feature a collection of second hand watches on our store. Take a look below at some of our latest pieces. 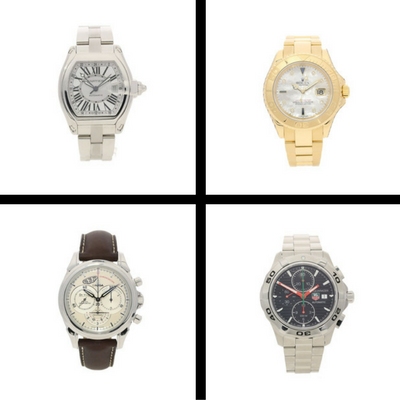